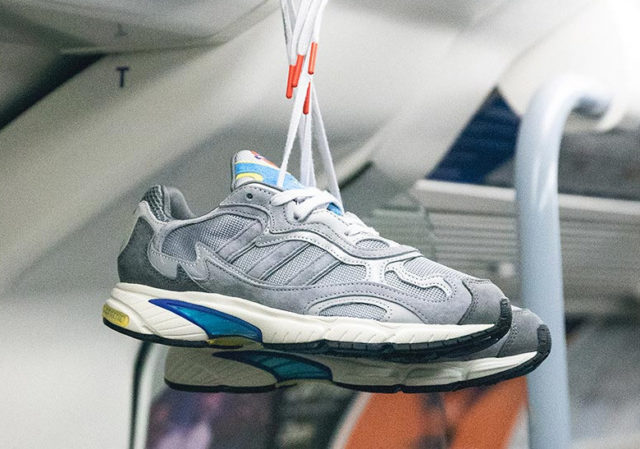 This pair of shoes has a rich color in its gray color.

Transport For London is an institution that has been the driving force behind the city for a long time, responsible for getting the London Tube up and running – an iconic and integral part of the city’s culture.

Now, adidas is set to give TFL the credit its due by way of a collaborative colorway of the retro-inspired Temper Run silhouette. Inspired by the intricate Tube system, the model calls upon various shades of grey relating to the Underground, while the system’s “Mind the Gap” slogan comes emblazoned on the tongue and the insole inside its recognizable Roundel logo. Hits of blue and yellow freshen up the simplistic selection on elements the likes of its throat, sole units, and tongue.

In order to put this drop’s inspiration through the roof, each pair will releasing alongside a pre-loaded and co-branded Oyster Card – London’s version of a MetroCard – with £80 on it as well as a matching leather wallet. Pairs of the TFL x adidas Temper Run are slated to arrive at Footpatrol London at 10am local time on October 27th, so grab a detailed look below and be sure to stop by and snag one of the 500 pairs in circulation if you will be in the area. Next month, this partnership will continue by way of an adidas Continental 80 and a ZX 500 RM set to drop on November 3rd and November 10th, respectively.