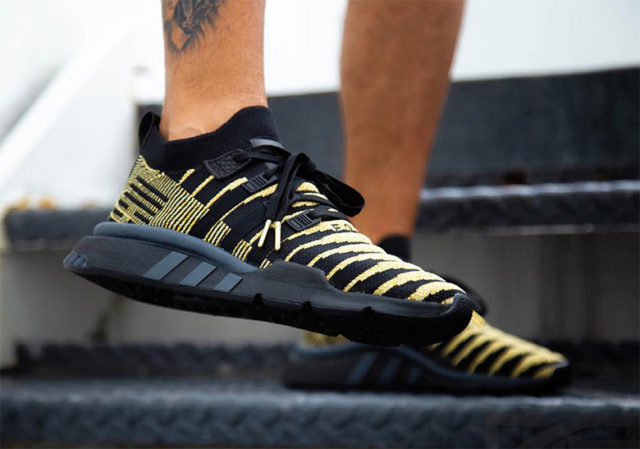 This pair of shoes is a combination of gold and black. It looks like these shoes have some luxury.

The adidas Dragon Ball Z collection is any anime lover’s dream. Featuring seven well-crafted shoes with an attention to detail that’s second-to-none, the pack’s rollout began in earnest last month with the release of Goku’s adidas ZX500 RM and Frieza’s adidas YUNG-1. Now new info has surfaced — and it indicates that the pack may in fact consist of an even eight shoes instead of seven.

Previously, Shenron’s green and red adidas EQT was the only shoe in the collection that didn’t have a match, but now it appears as if it’ll also be released in an alternate black and gold colorway as well. The color combo nods to Super Shenron, the largest dragon in the Dragon Ball Z universe, and the only creature with the power to grant a wish to the holder of all seven dragon balls. An interwoven black and gold Primeknit upper provides style, and Chinese characters on the medial side of the heel nod to the dragon’s genesis. The shoe is then completed by a simple black midsole and outsole. No official release date has been provided yet, but get a first look below, and look for these new DBZ kicks to drop later this fall/winter.