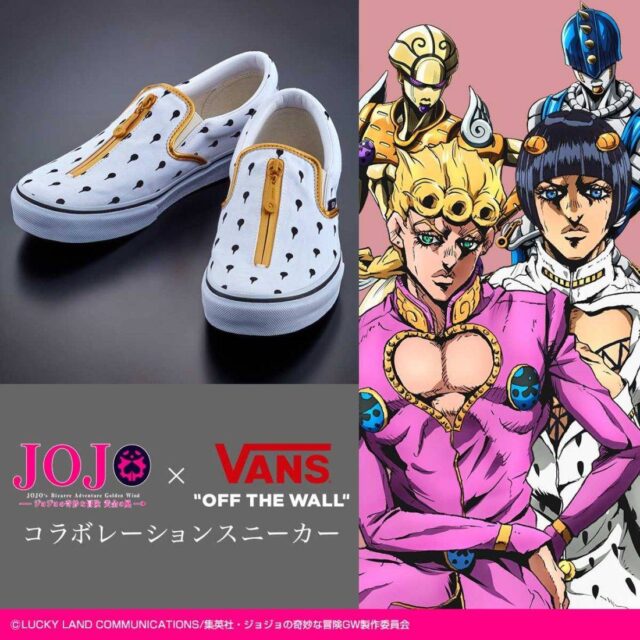 Bandai SPIRITS, part of Bandai namegong group, a major Japanese “second order” company, decided to create Era and slipon shoes by co-creating a line of Vans and JOJO adventure: the wind of gold.

JOJO’s fantastic adventure: the wind of gold is the fifth in a series of cartoons of the same name by kazuhiko araki. The film is produced by David Production and premieres on Tokyo MX on October 5, 2018, while Bilibili releases the original version in China.

The story is about a young man named choluno giobana who lives in Naples, Italy. He is the heir to the blood of the old enemy of josida, DIO. Abandoned by persecution as a child, he learned to “trust others” by saving a gangster man. Do not forget kindness, maintain respect to treat oneself sinister gang, let his heart become straightforward. In this way, he began to look forward to the “rogue superstar”. The 15 – year – old joruno, and the Italian gangsters leading the underworld “PASSIONE” together to cause trouble, and become a targeted target…

The Vans Era “Jorno Jovana ver.” is based on the classic powder look of the film’s hero, Jorno Jovana. The shoes are covered in bright pink velvet. Not only that, but because of the Era’s strapless design, the original lacing holes were adorned with special brass fittings.

Vans Slip-On “Brono Bucharati ver.” recreates the classic look of another leading man, Bruno Bucharati. The tadpole pattern is regularly distributed On the white canvas of the shoe body. I know I am, “text, and the left foot, “Arrivederci/goodbye,” and the details are also treated with gold piping.

Jo-jo wonderful adventures: gold wind on two pairs of shoes insoles in the joint are drawing cartoon painting as an ornament, and bottoms of the lateral edge is first adopted the obvious protruding rubber block design, Logo emblazoned with huge jo-jo, two pairs of shoes will be equipped with a blue background, be full of flowers, shoe sale, with the top middle of drawing has been great of lady beetles, flanked by the brand Logo on both sides.

The “JOJO adventure: the wind of gold” co-branded x Vans collection is now available for pre-order at 9,720 yen, tax free 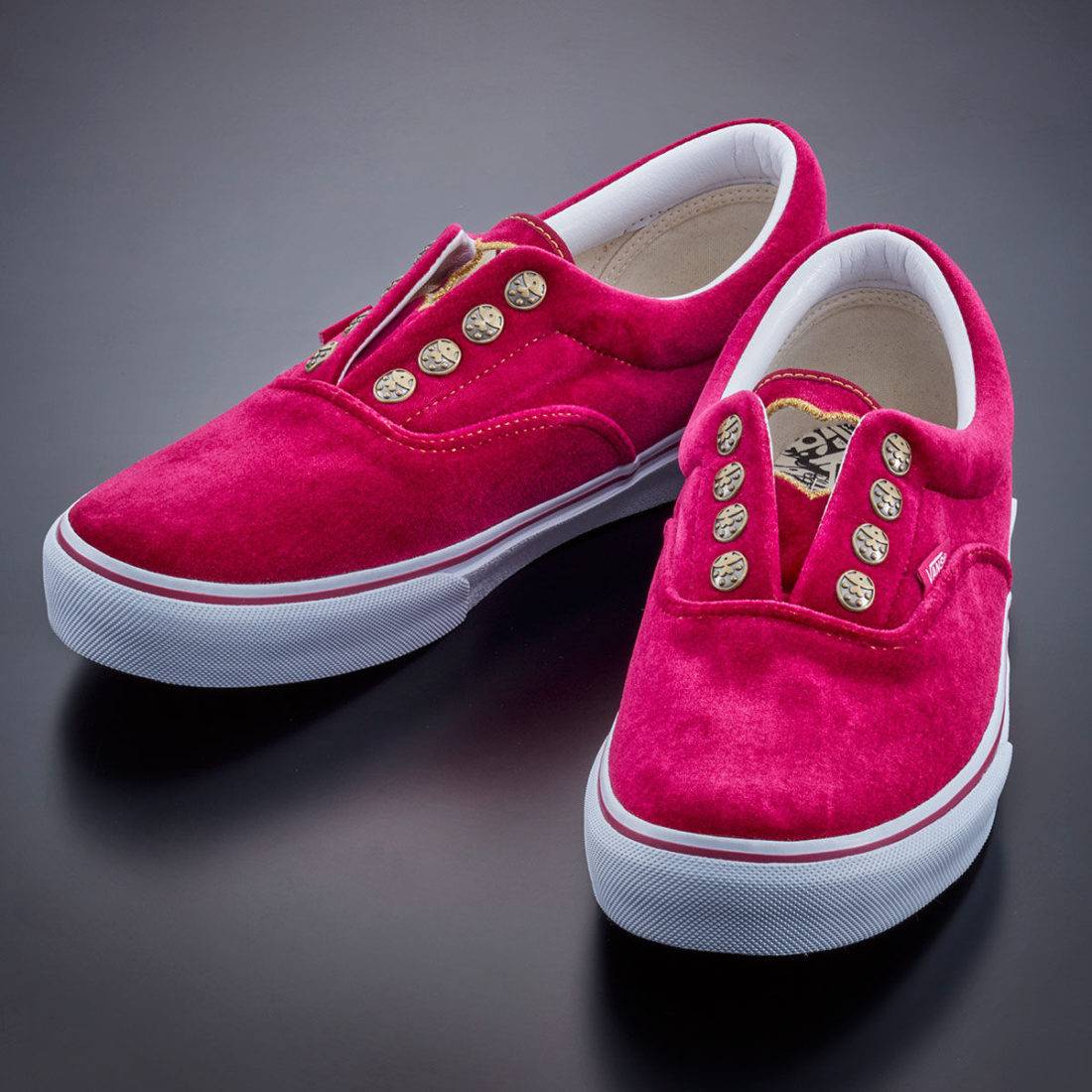 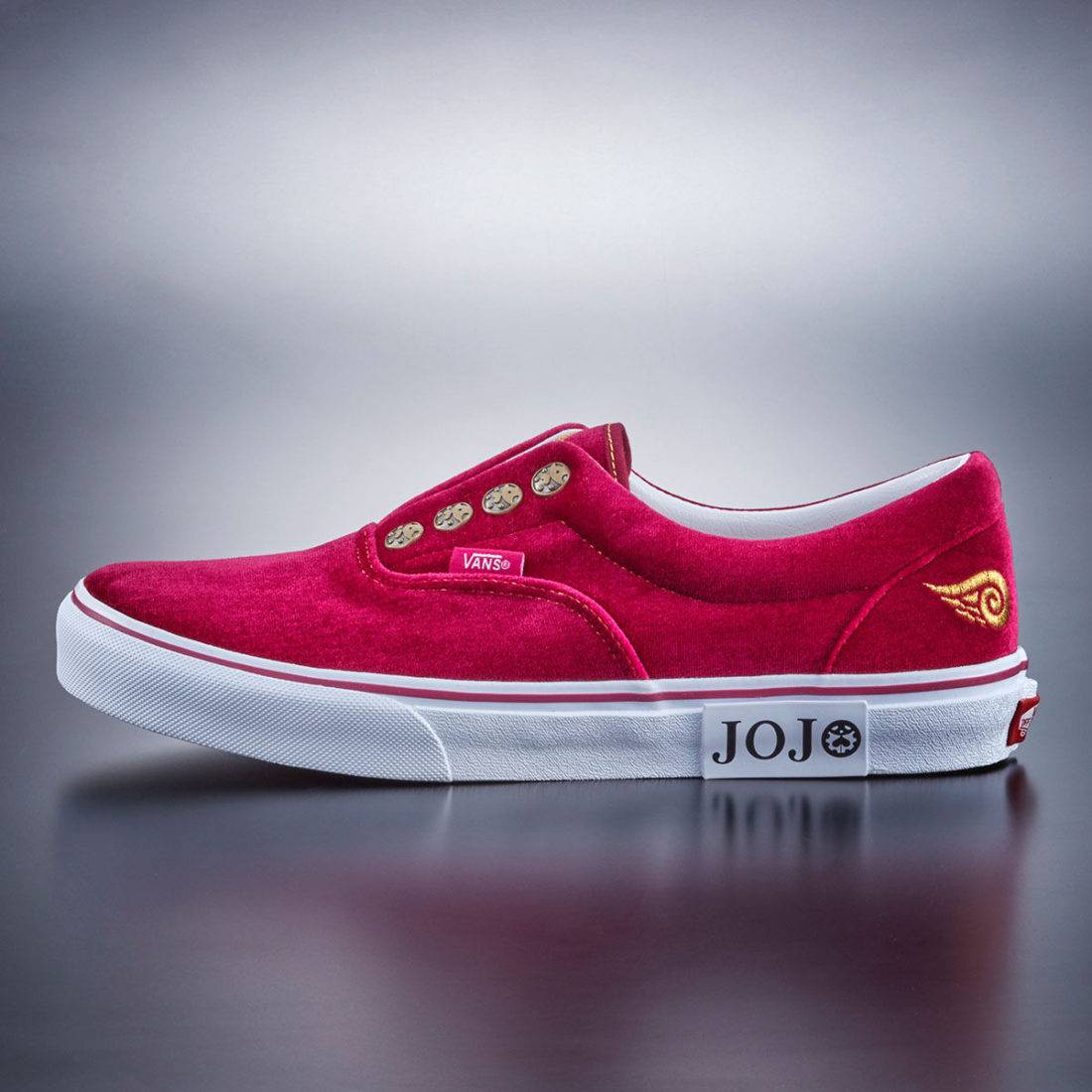 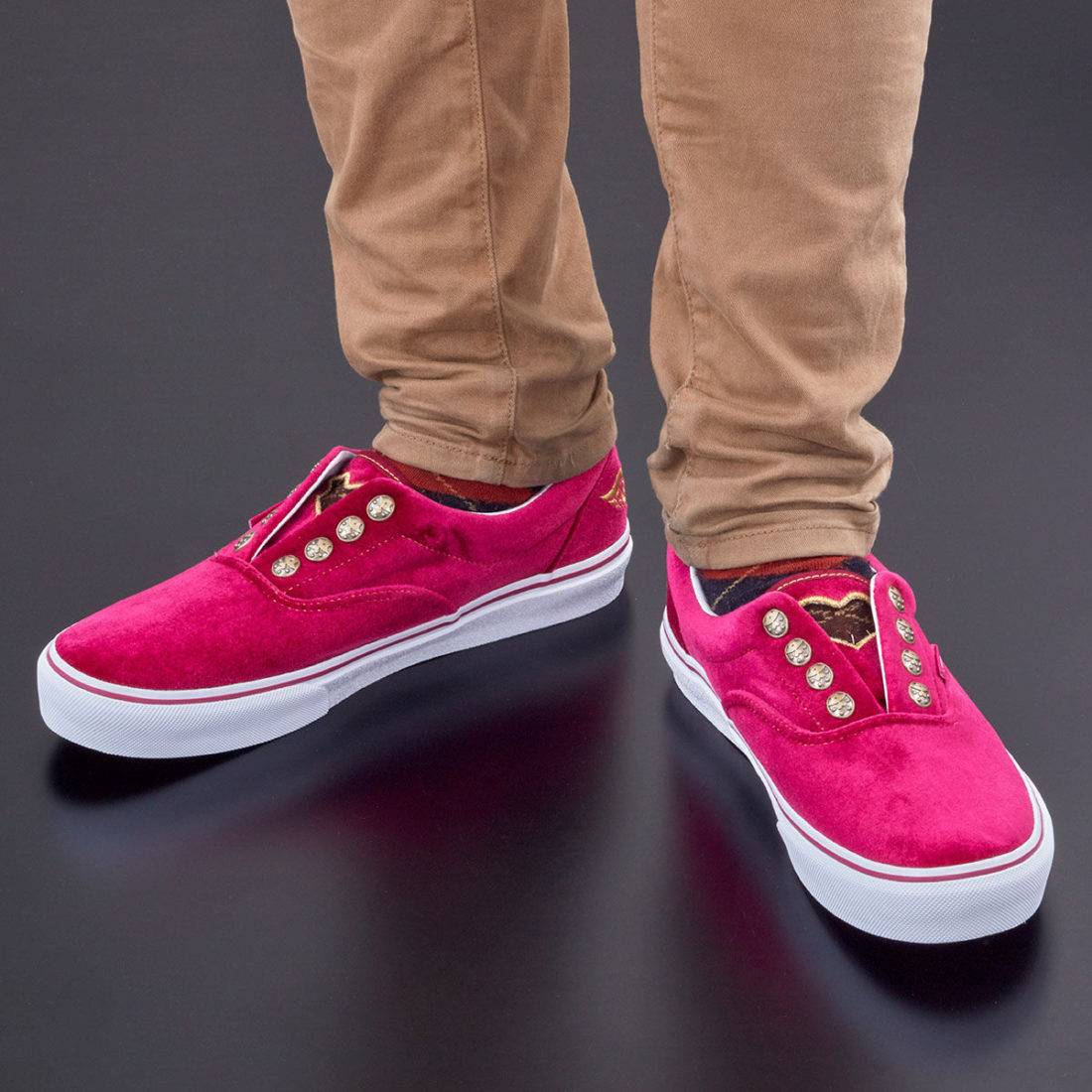 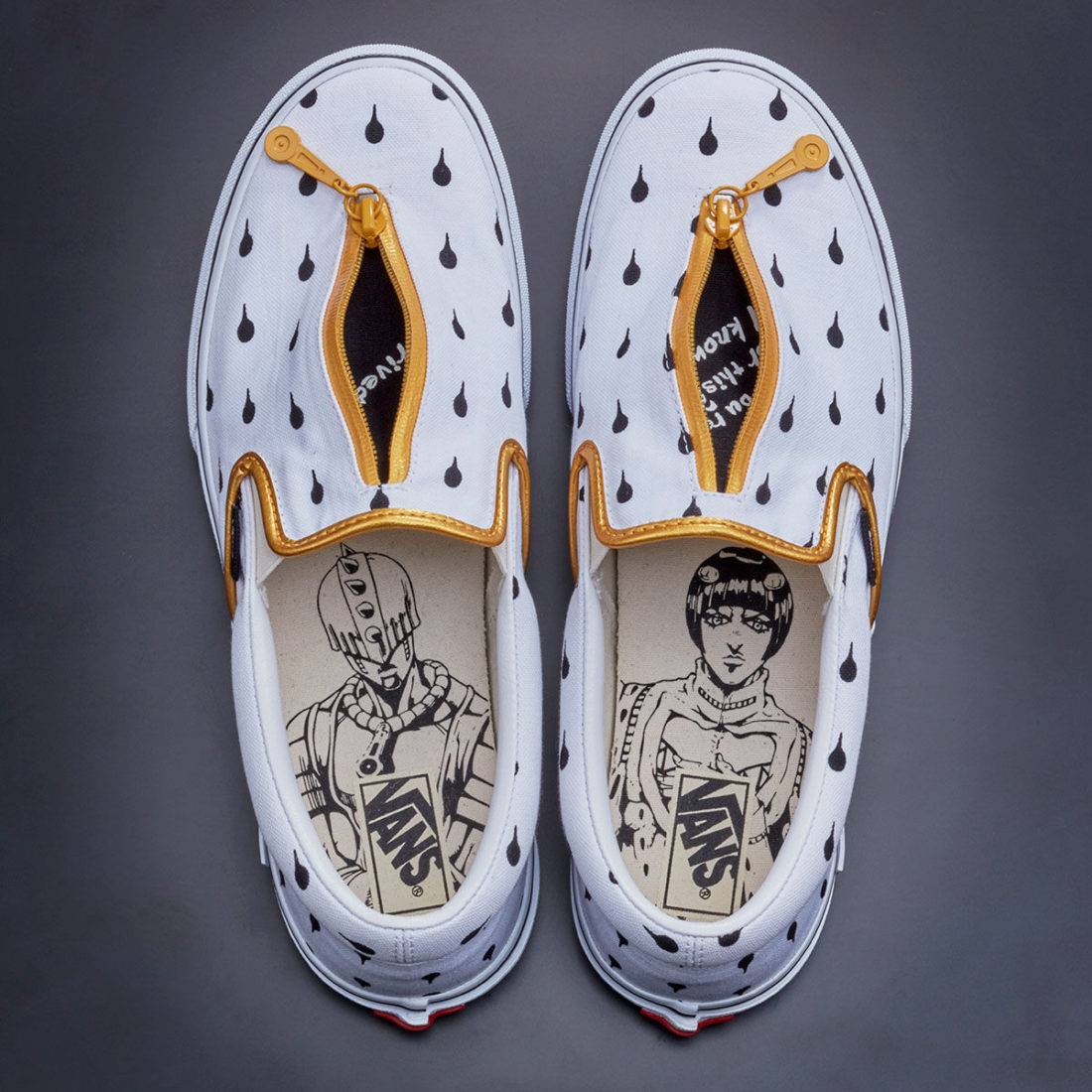 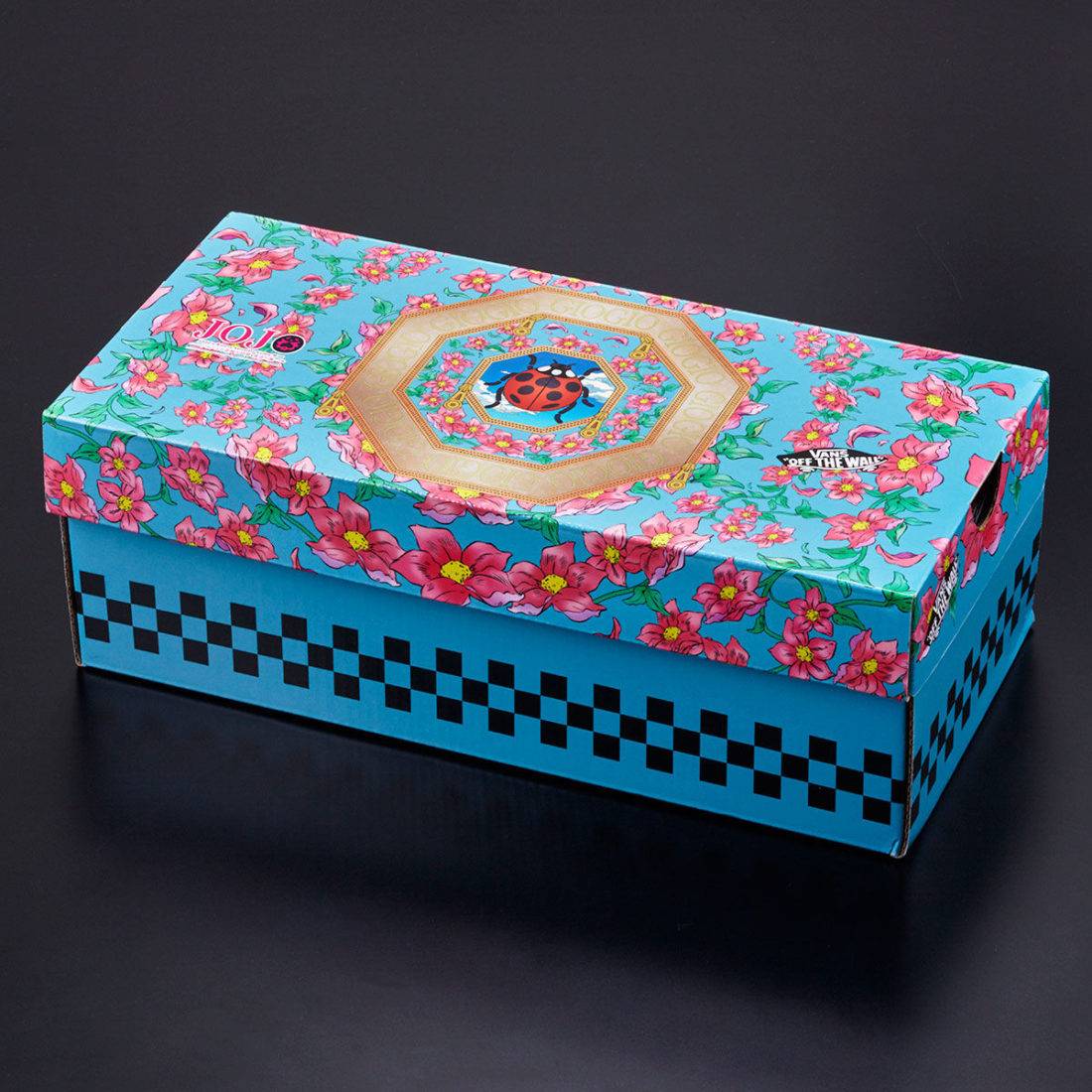