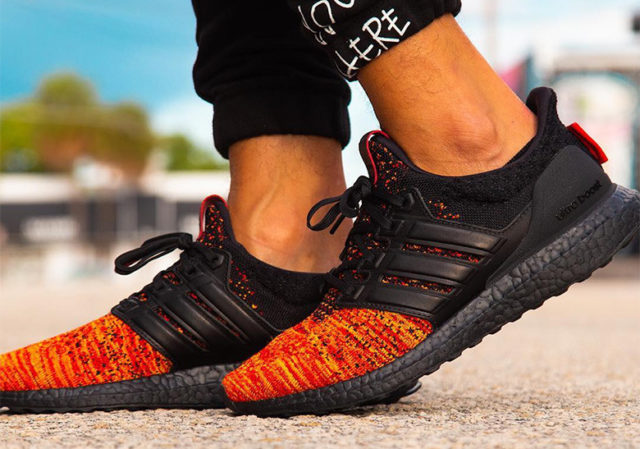 adidas’ seven-piece Dragon Ball Z collection is in full swing. With Goku and Frieza’s pieces having kicked off the set last month, and Cell and Gohan’s many battles set to be re-interpreted in a few weeks, Trefoil Brand and anime fanatics alike have much to look forward to. Next year, the German Sportswear label has a treat for sci-fi and HBO appreciators as well, by way of a full-scale Game Of Thrones collection utilizing the Ultra BOOST silhouette as its vessel.

Set to include all of the famous houses from George R.R. Martin’s now-iconic series, one of its main group of protagonists will actually be receiving two iterations. With one set to come inspired by the silver hair, fair skin ridden race of Targaryens, its counterpart will come adorned in black and fiery red to emulate the dragons they ride. As the series enters its final season next year, Daenerys and her dragon children are inarguably the most enticing and menacing figures in all of Westeros.

To portray the immeasurable power these creatures possess, this adidas Ultra BOOST starts with black Primeknit at its heel and calls upon a gradient effect that fades to a deep orange, red, and yellow mixture towards its toe, resemblant of their jaws opening up and spewing fiery destruction at their prey. No official release information has been reported for the adidas Game Of Thrones collection, but check out the best set of images below that include all of the Targaryen-specific embellishments, and stay tuned for updates.